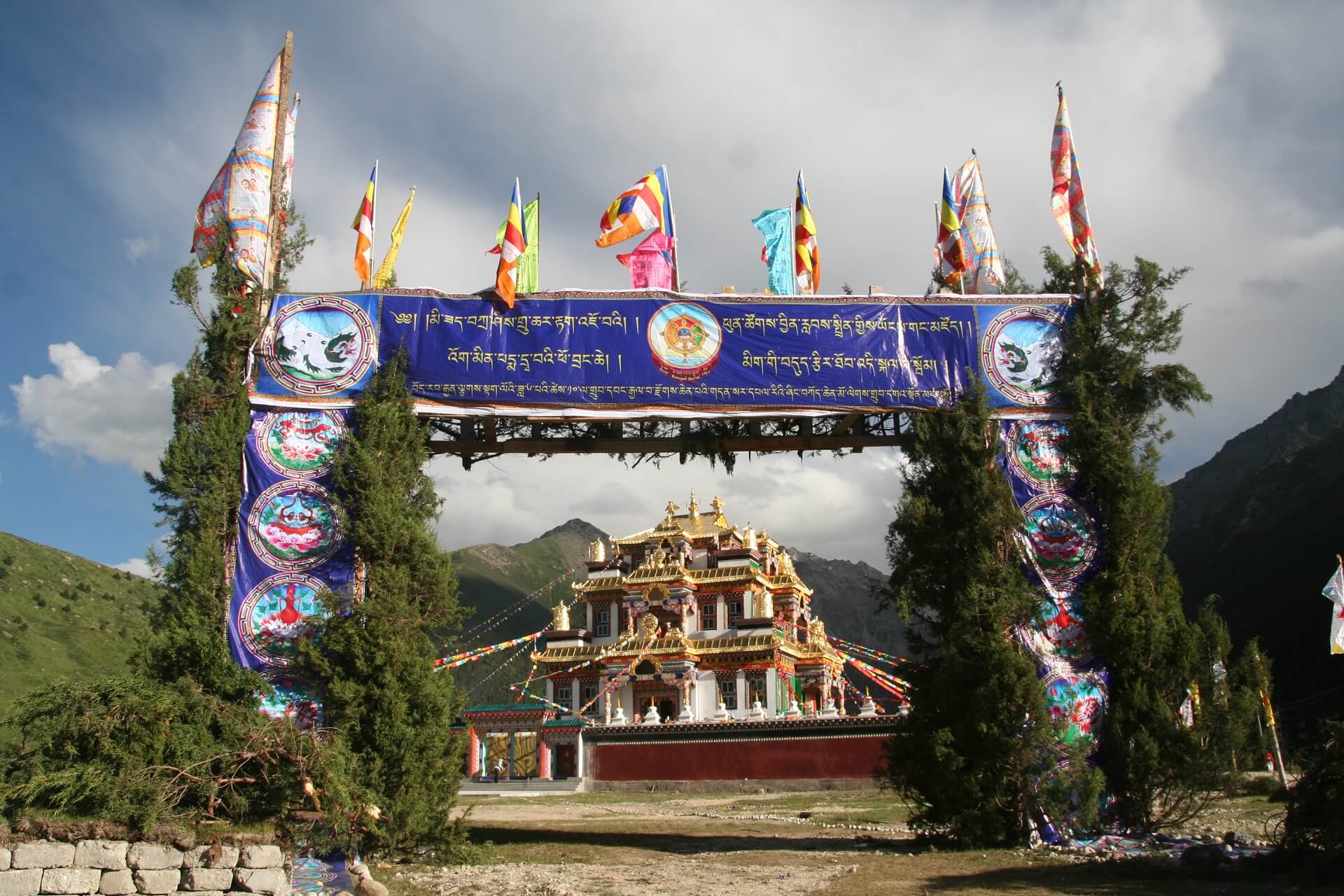 Zangdok Palri, the glorious copper-coloured mountain,
is a place perceived by superior beings as the pure land of Guru Rinpoche.

which is happiness and perfect bliss.

A pure land has no conflicts or bias, no violence or prejudice. It is an amazing place, full to the brim of loving kindness, where all beings love each other. But of course, it is not a place, because it can only be perceived within mind. Our perceptions arise out of habit-forming imprints. So, we study and practise the Dharma, and gather the two accumulations, in order to have such peaceful perceptions.

Pure Land, and that whoever has a connection with it through making a donation,

seeing it, touching it, or even hearing about it, may perceive the peace of a pure land,

and particularly, the pure land of Guru Rinpoche.

We are building the institute because of some very particular auspicious coincidences connected to it.
The actual site of the institute is very special. Back in the 18th century when some  workmen stopped for a break on their way up to the retreat centre with a statue of Guru Rinpoche, they put it down on the ground, and instantly there was a rain of saffron rice. They felt sure that this was a blessing from Jigme Lingpa, who was near Lhasa at the time, or from Guru Rinpoche himself.
There were two occasions when the statue talked. The first time was shortly after it had been placed in the retreat temple. One day, when the temple attendant was busy with his duties, the statue called out to him, ‘Hey, you there! Listen! There will be an earthquake today. Tell everyone to stay outside.’ And later on that day, the whole of Dzogchen was flattened, but not a single person was hurt or injured.
The first Patrul Rinpoche was also the speech emanation of Jigme Lingpa. 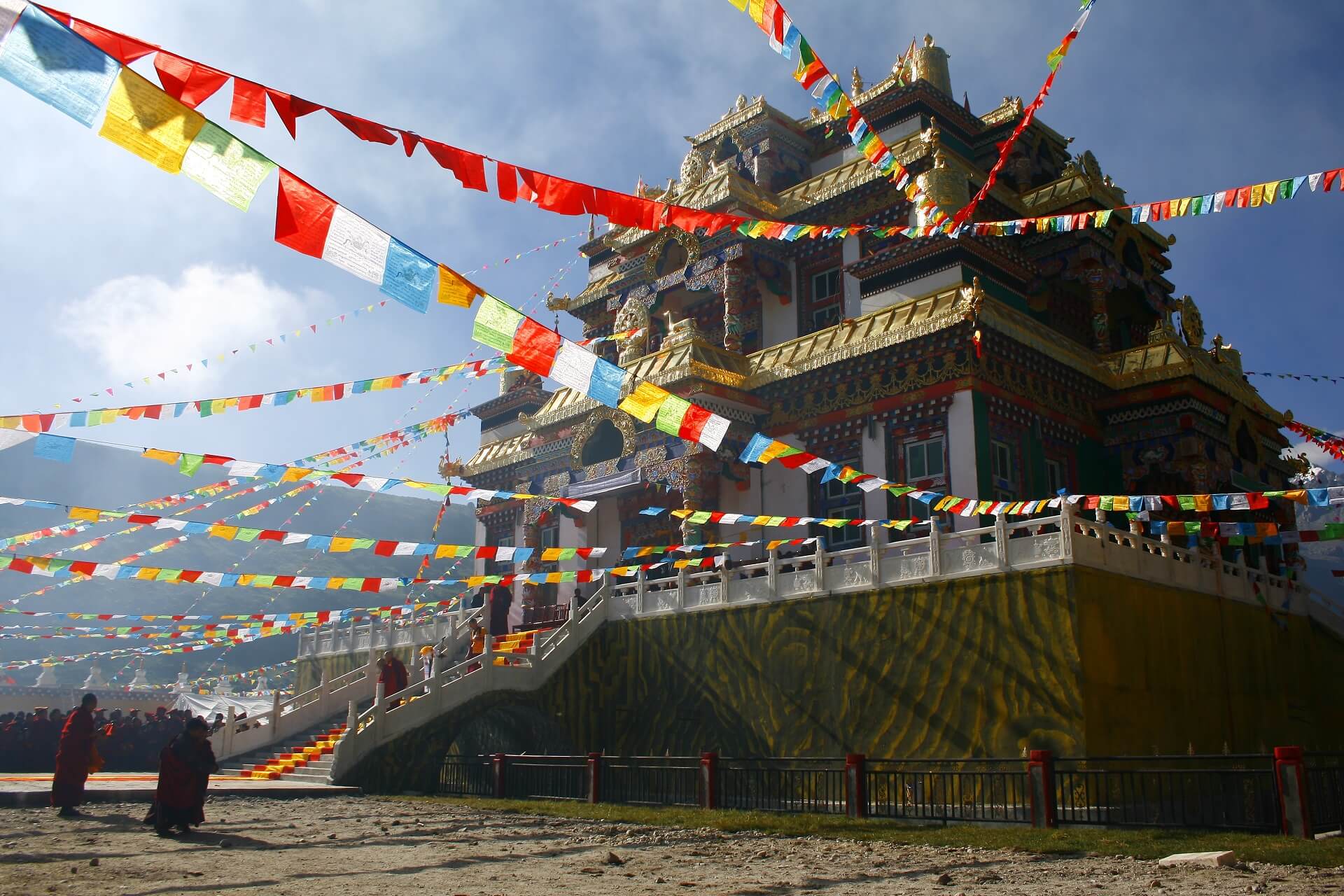 Originally, the institute was to be built up in the monastery, but the suggestion for its present location arose spontaneously in the mind of H.E. Pema Kalsang Rinpoche, the head of Dzogchen Monastery, who had entrusted the construction of the institute to Patrul Rinpoche. He said that it was to be built in Karmo Yongchil, the exact spot where the statue had had such an amazing effect all those years before.
There have been many other special signs connected with the site. In the summer of 2004, during teachings on Yeshe Lama given by Shabje Penock Wontrul Rinpoche to 25 tulkus and khenpos, there was a spontaneous gathering at the site one day when the lamas performed a magnificent tsok. Suddenly, during the prayers, in the sky above their heads, appeared the sun, the moon and a star all together.

This is an extremely important project.
You are all welcome to take part in it. 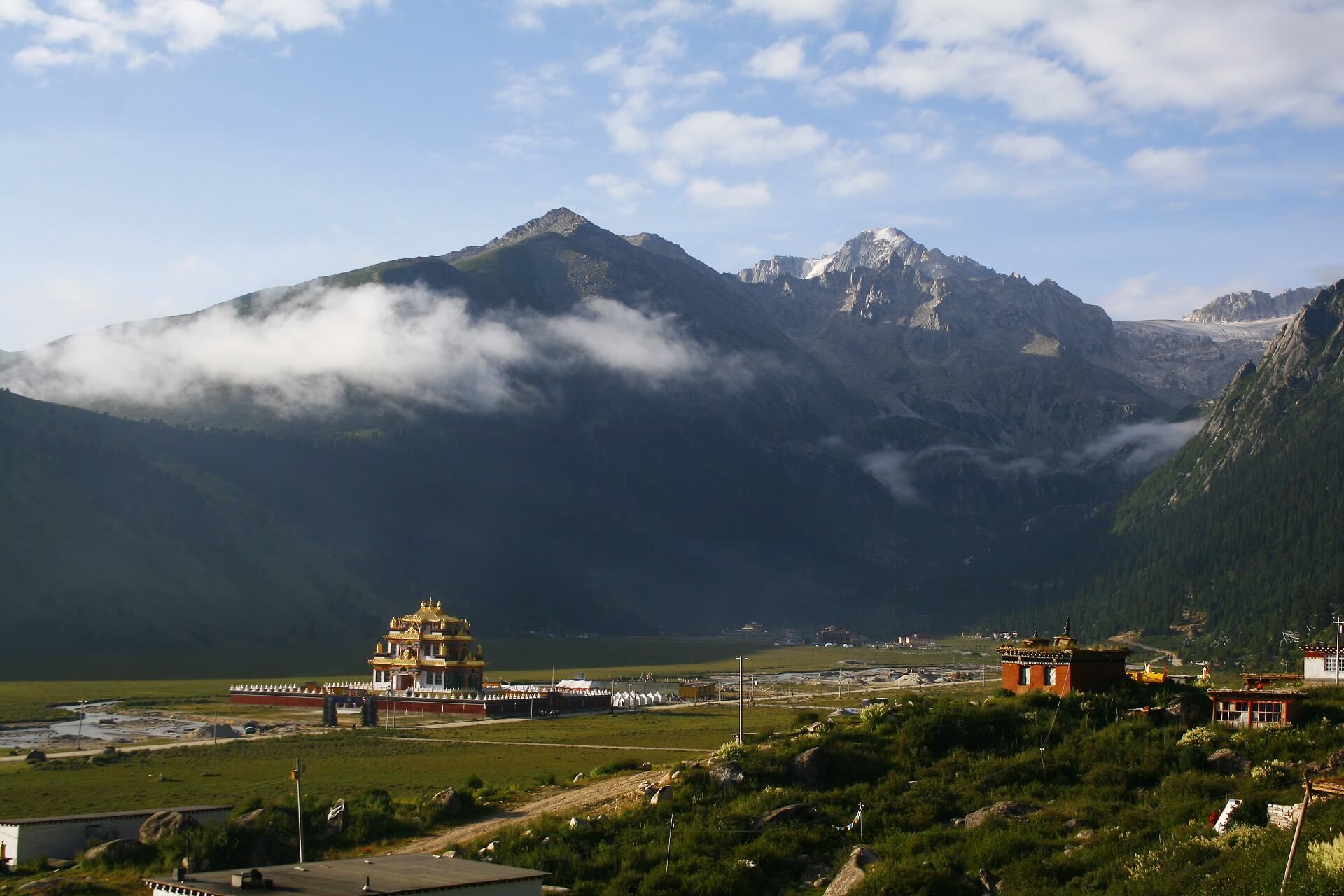 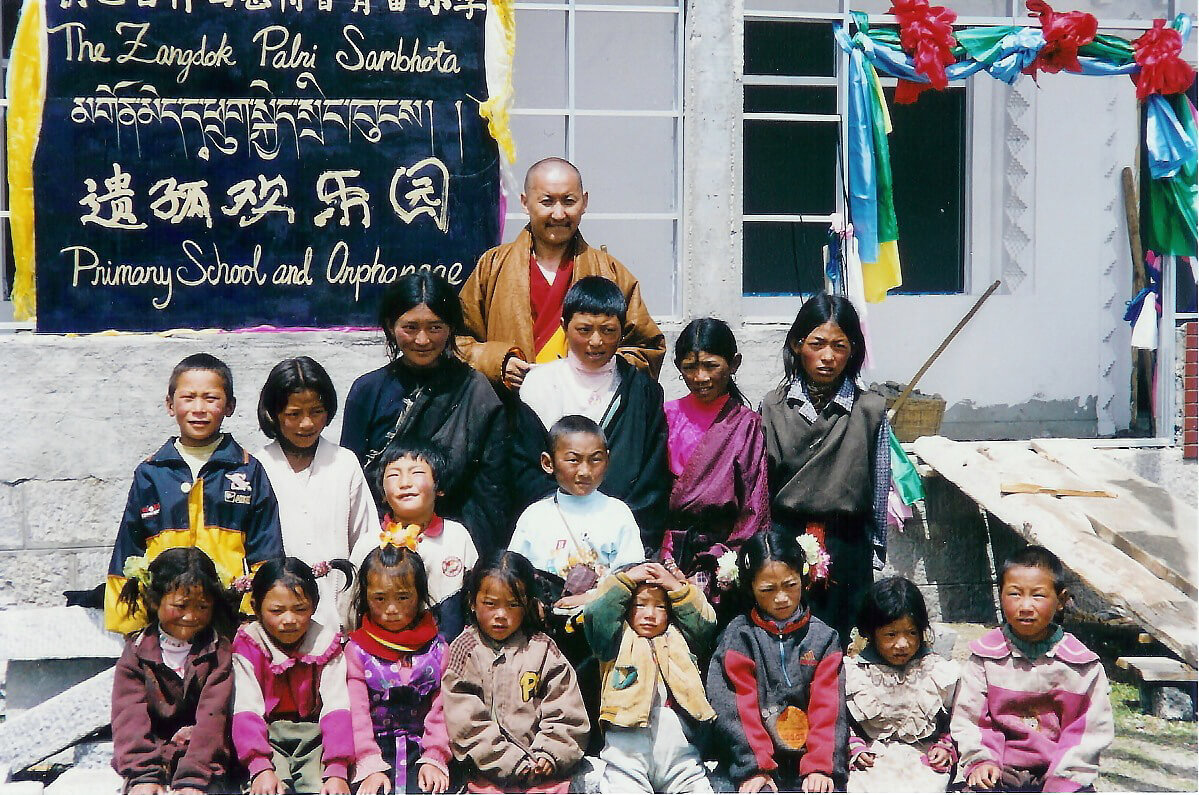 Article about the preservation of Tibetan culture and heritage. A part of the Zangdok Palri in Dzogchen, a program for education for orphaned children in Tibet. 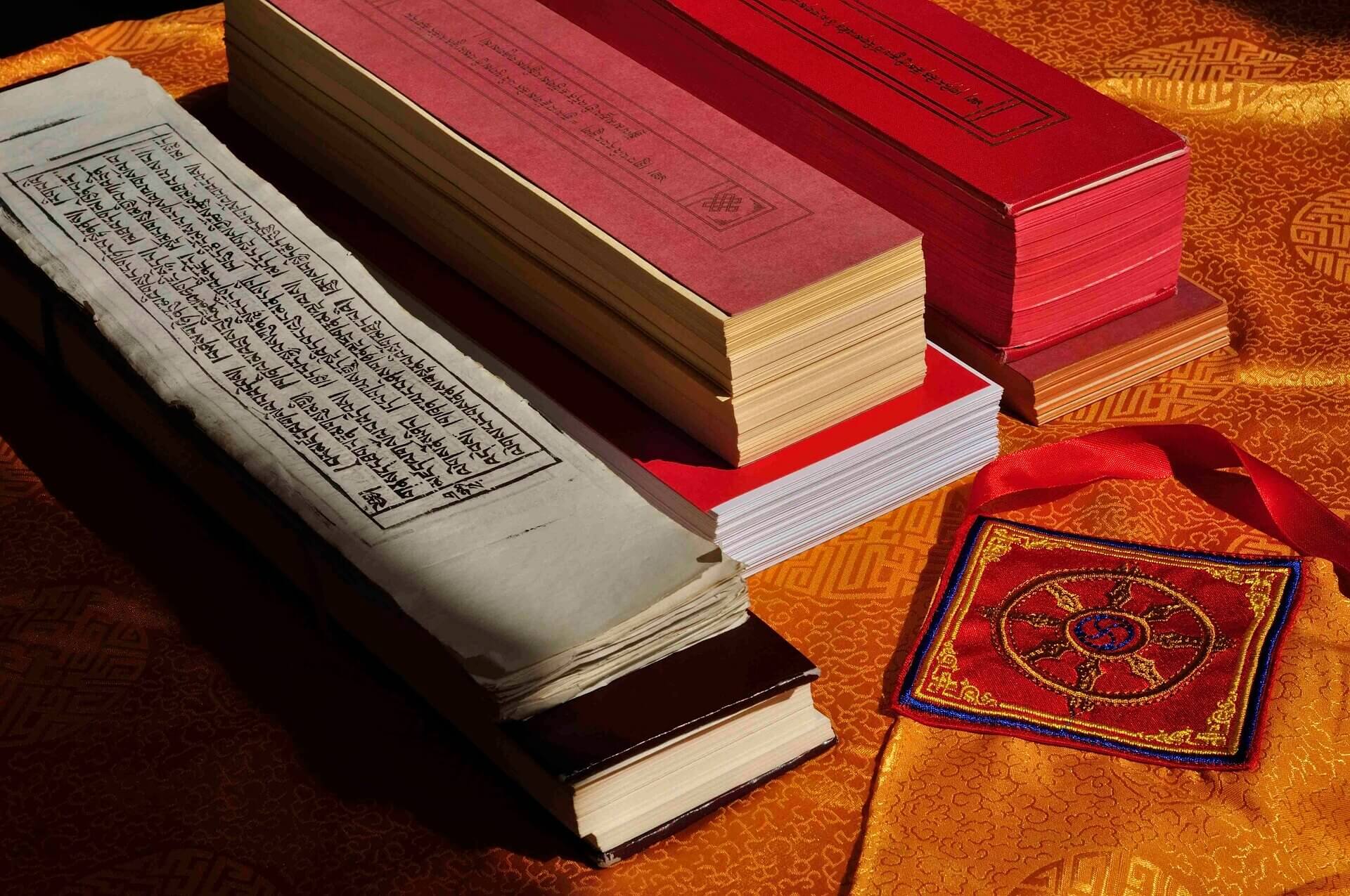 go to our reading room

We use cookies on our website to give you the most relevant experience by remembering your preferences and repeat visits. By clicking “Accept”, you consent to the use of ALL the cookies.
Cookie settingsACCEPT
Manage consent

This website uses cookies to improve your experience while you navigate through the website. Out of these, the cookies that are categorized as necessary are stored on your browser as they are essential for the working of basic functionalities of the website. We also use third-party cookies that help us analyze and understand how you use this website. These cookies will be stored in your browser only with your consent. You also have the option to opt-out of these cookies. But opting out of some of these cookies may affect your browsing experience.
Necessary Always Enabled
Necessary cookies are absolutely essential for the website to function properly. These cookies ensure basic functionalities and security features of the website, anonymously.
Functional
Functional cookies help to perform certain functionalities like sharing the content of the website on social media platforms, collect feedbacks, and other third-party features.
Performance
Performance cookies are used to understand and analyze the key performance indexes of the website which helps in delivering a better user experience for the visitors.
Analytics
Analytical cookies are used to understand how visitors interact with the website. These cookies help provide information on metrics the number of visitors, bounce rate, traffic source, etc.
Others
Other uncategorized cookies are those that are being analyzed and have not been classified into a category as yet.
SAVE & ACCEPT